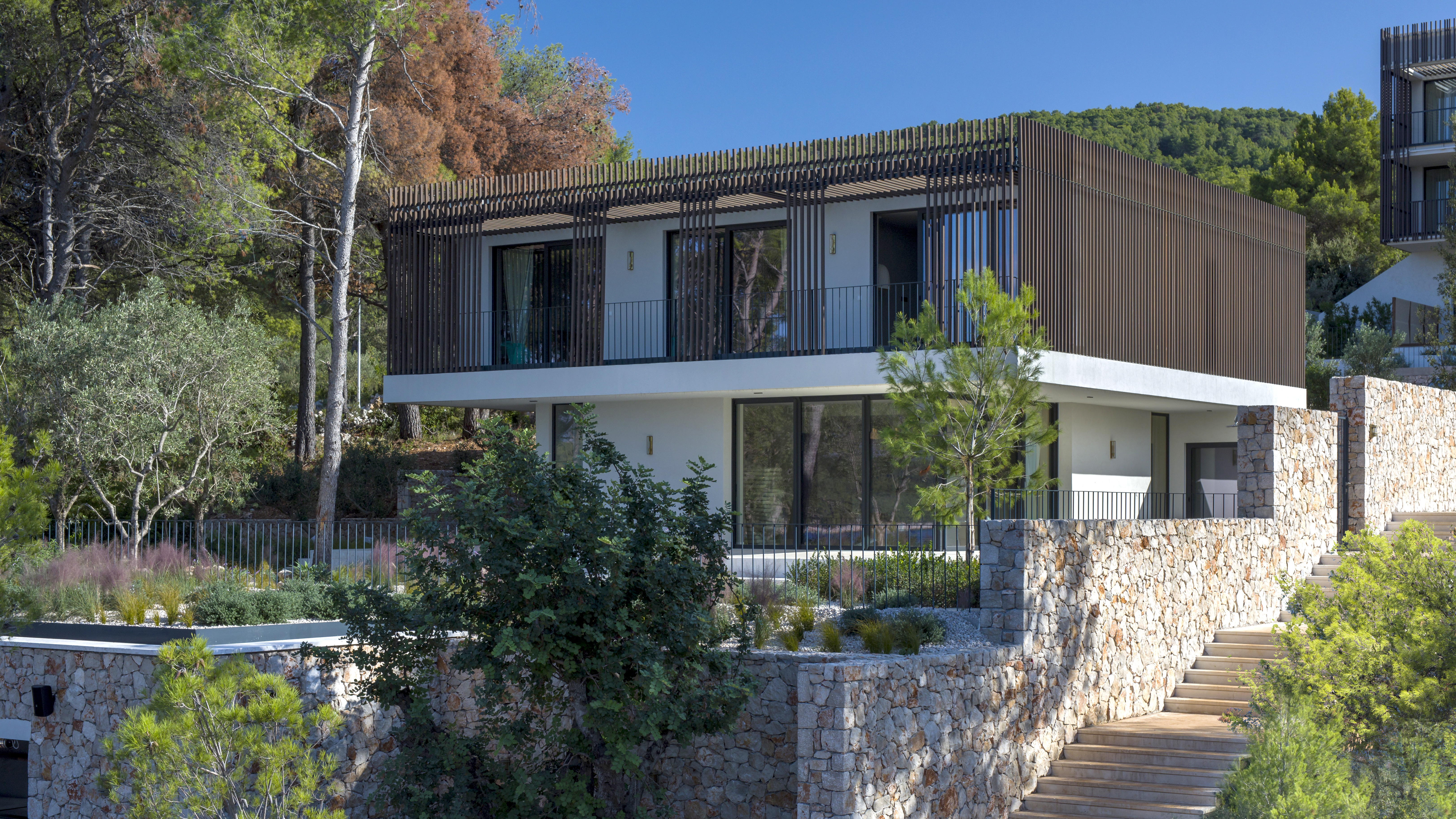 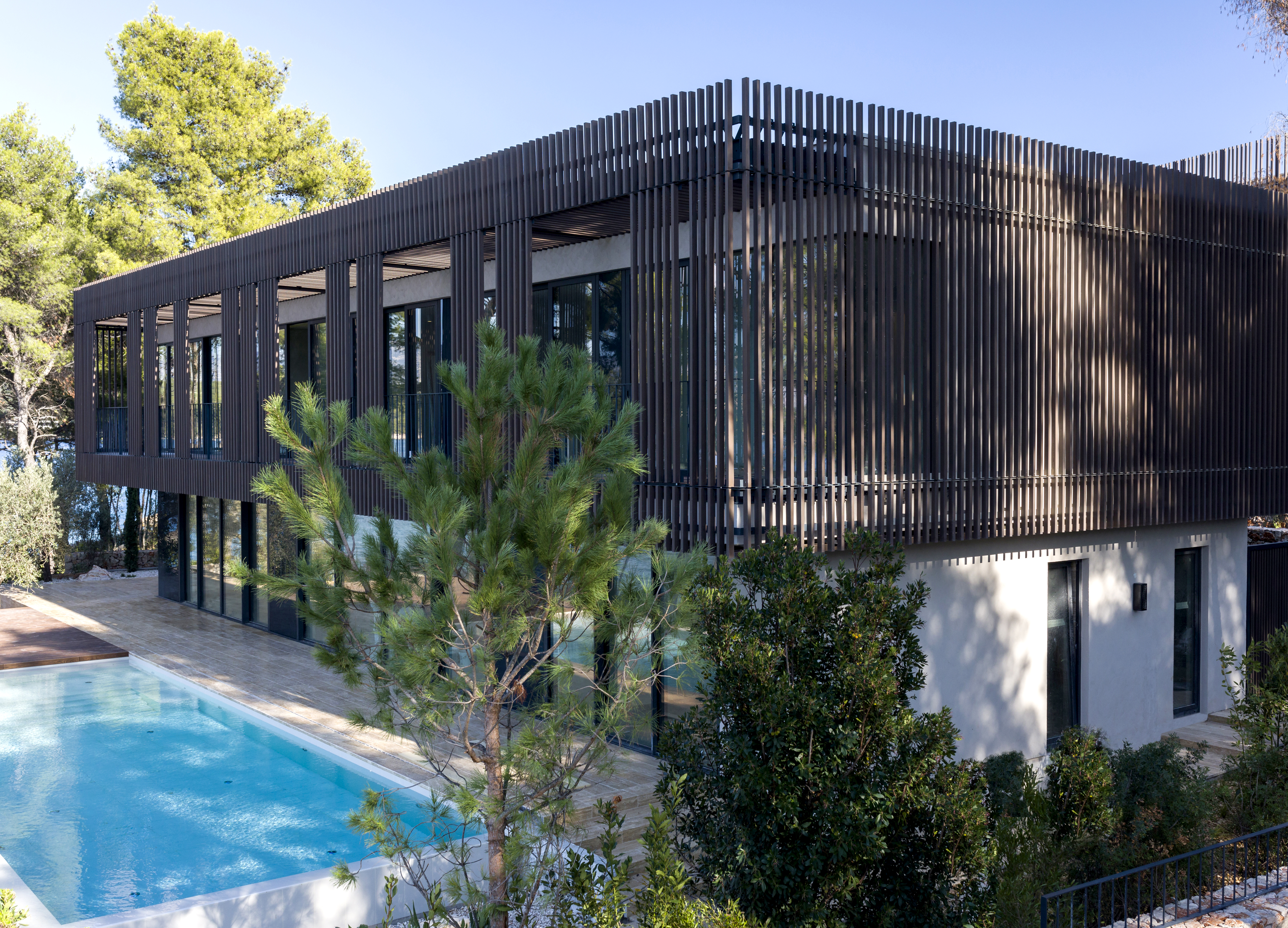 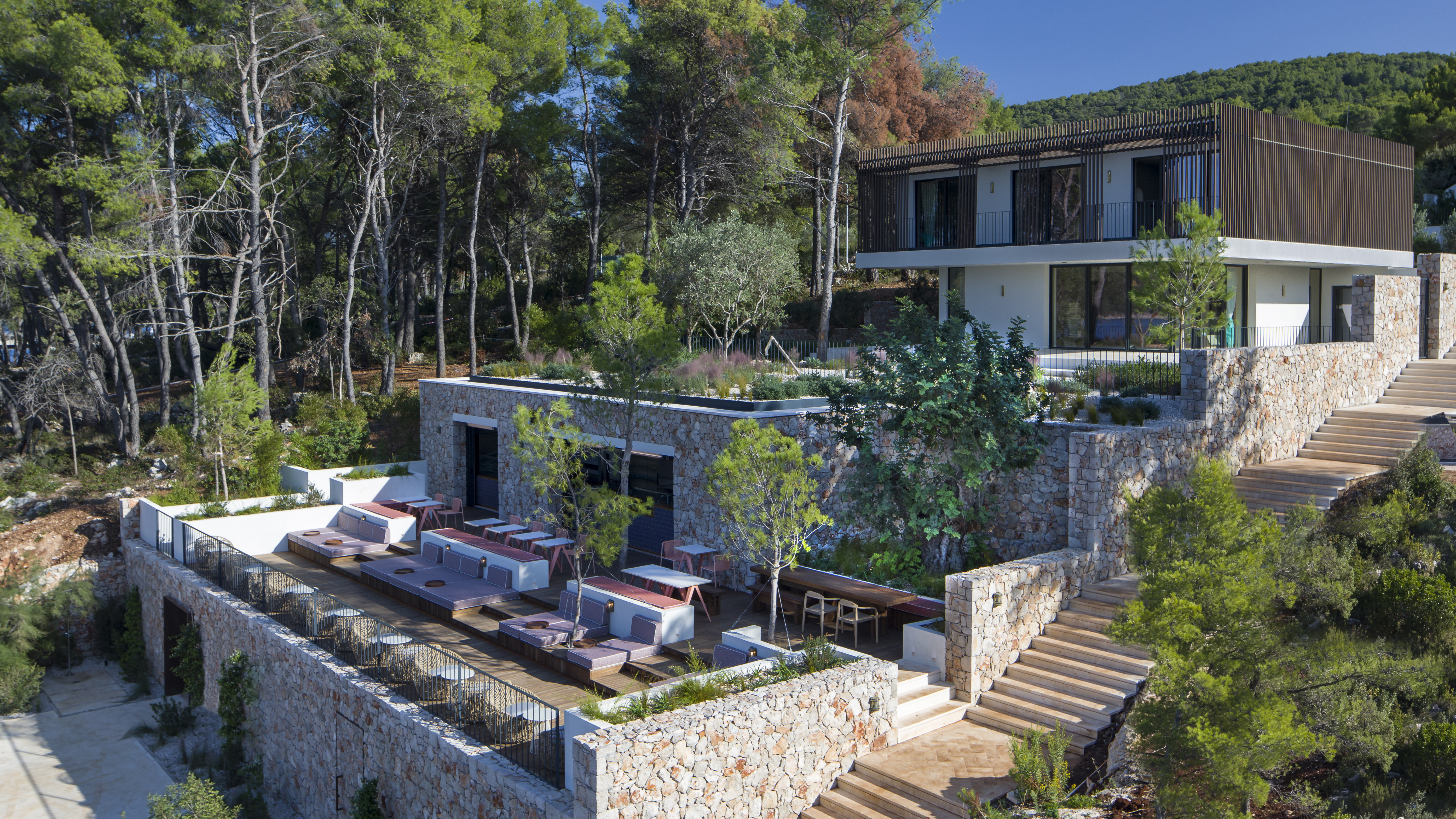 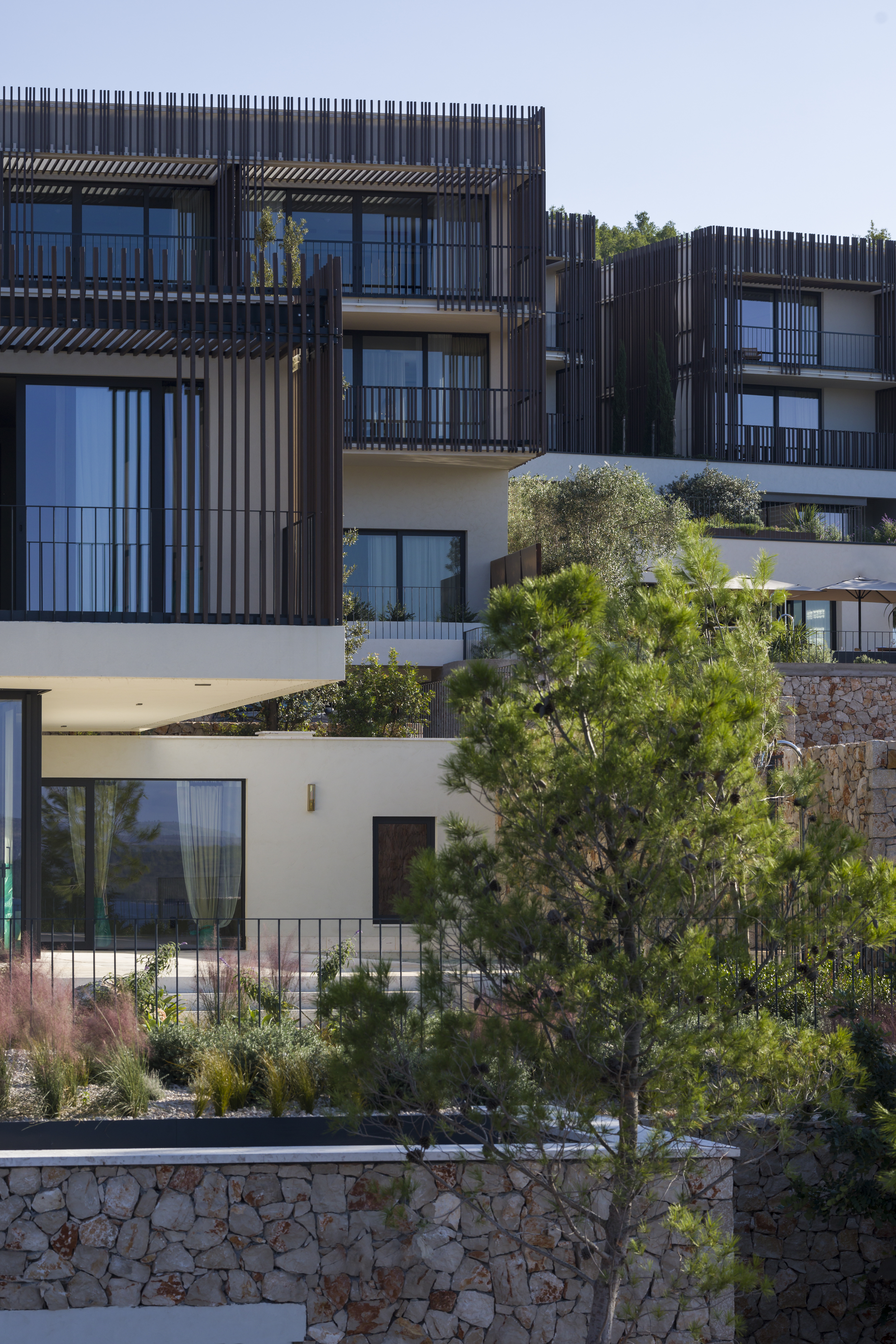 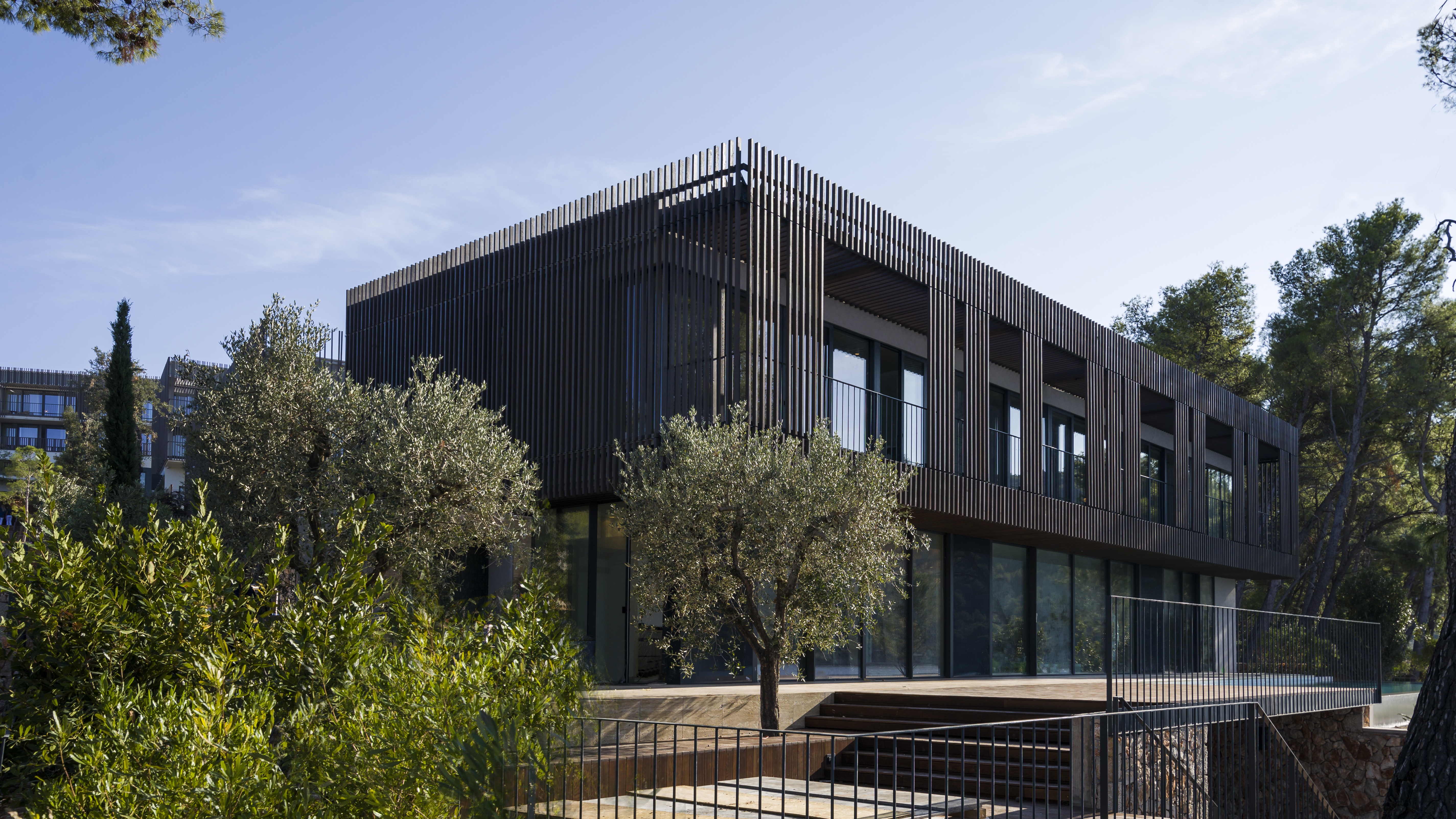 Low-intrusive architecture floats on the landscape like scattered pavilions, decorated with a ventilated wooden facade that blends in with the island environment.

“It was really a complex mission, considering the fact that we had to design a large hotel by not obstructing the existing natural ambient context. The design approach was to keep as much of the Mediterranean landscape as possible, and then integrate the architecture in between. For a resort, this is not an easy job.

The total surface of the hotel is 7000 m2. That is enormous in relation to the area of the plot. To avoid the typical hotel appearance of a long facade, we designed the project in the way that all service and public spaces are in the sub-terrain, architecturally designed as a part of the contour line of the surrounding slope. The rooms are dispersed as scattered pavilions floating in the landscape, all facing the sea with an unobstructed view.

In my opinion, the quality of a five-star hotel is privacy, and this scattered concept provides just that. Thus, you have just a few neighbors on each floor and full privacy. The rooms are 65 sqm which is pretty large and unlike your typical luxury hotel. You don’t have the feeling you’re in a hotel but in your own apartment facing the Mediterranean.

As an architect of luxury hotels, you have to enter the psychology of the people who use this level of service. You have to recognize their habits and provide space for the service they are familiar with and expect.”

“When I first spoke to the investors about the hotel plot, they said that they remembered coming to Stari Grad for the first time years ago, and they had a vision of a modern hotel fully integrated into the landscape; aligning with the trees, and without obstructing nature. That’s how we agreed on the idea of the elegant vertical wooden facade as the main architectural element. The aim was to create a visual fusion between the brown tree trunks and the hotel facade. A vertical rhythm.

In Dalmatia, wood is not used as a final material. When I said to my team that we were going to use wood for the facade, they were surprised. I told them it would be a challenge, but why not try to do it in a contemporary way?

That facade is now very recognizable, and it gives this lightness and transparency to the building. The building is big, but it is broken up and dispersed to feel smaller.

We wanted to have a dialogue between the interior and exterior, and to eliminate borders in between. Our idea was to have flexibility between the indoors and outdoors, so the guest should feel free while using the space, especially because the hotel is on Hvar; an island with a mild climate where you can spend most of the year outdoors.

We focused on the details to align the interior and exterior in one functional surface using the same terracotta flooring, installed light pivot doors in the restaurant to connect spaces, situated the bar as the island, half inside and half out. In that way, no one will really care if they are sitting here or there.”

How does the Maslina Resort architecture minimize environmental impact?

“The project is very environmentally conscious. Climate change requires upgrades in our architectural language which implies sustainable commodities, and this hotel is meant to be one.

We used all-natural materials. The main element on the facade is larch wood. For flooring, we used terracotta and wooden decking inside and outside. The structure walls are kept in natural concrete and crushed local stone. There are no artificial materials in the hotel. We really thought about the influence on nature. The total approach is environmental.

The architecture is just one layer and the base of this story; it’s a shell where the time and people inside have to create the atmosphere. We will see if we need to add something or adapt something over time. We have to remember that people come here on holiday, and they don’t want to be obstructed with too many details, so we wanted to keep it simple. We want Maslina to be a modern take on the Mediterranean essentials.“